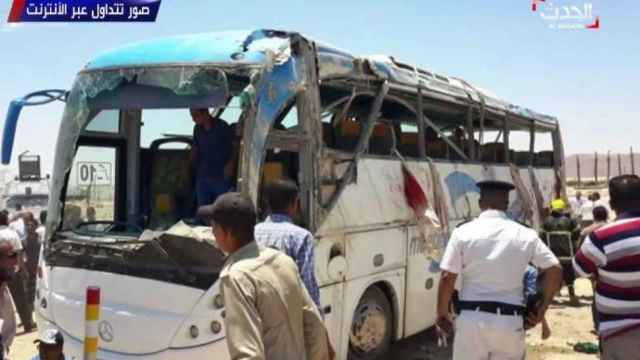 The point of this essay is to puncture the West’s Politically Correct meme, an ideologically-useful fiction according to which Muslims are always victims and Christians are victimizers—or, at the very least, are never victimized.

The painful reality is that, globally speaking, when it comes to the topic of religious persecution, the adherents of Islam are the biggest persecutors while those of Christianity are victimized more so than the members of any other religious faith.

Jeremy Joseph Christian is a 35 year-old white man who, according to some press reports, is also a “white supremacist.”

Christian, you see, while aboard a train in Portland, Oregon, allegedly hurled “ethnic and religious” slurs at two young women who, evidently, appeared to have been Muslim. “Get off the bus and get out of the country because you don’t pay taxes here,” Christian is reported to have said.  He also, supposedly, expressed a dislike for Muslims and characterized them as “criminals.”

Three men who are now being hailed as “heroes” intervened.  Christian killed two of them, slashing their throats.  The third man was stabbed as well, but survived and is being treated for non-life threatening injuries.

There is much to this story that is still unclear (more will be written at a future time).  Predictably, the Islamic activists of the Council on American-Islamic Relations (CAIR) spared not a moment to exploit this tragedy for their partisan purposes.  CAIR’s National Executive Director, Nihad Awad, expressly implicated President Trump: “President Trump must speak out personally against the rising tide of Islamophobia and other forms of bigotry and racism in our nation that he has provoked through his numerous statements, policies and appointments that have negatively impacted minority communities.”

Awad’s remarks are not only fundamentally untrue.  For more than one reason, they are profoundly offensive.

One reason that they are offensive is that Muslims, far from being the most persecuted of religious groups in today’s world, are in reality the biggest persecutors.

The reality is that if there is a “rising tide” of any species of violent bigotry, it is Christophobia, not Islamophobia.  No religion is as persecuted around the planet as that of Christianity.

In February, the Center for Studies on New Religions released a study showing that last year, 90,000 Christians throughout the world were murdered because of their faith.  Nearly one-third of these victims were killed by Muslims.  According to Open Doors, an advocacy organization for persecuted Christians, 14 of the 20 worst purveyors of Christian persecution are Islamic countries, and the latter constitute 35 of the worst 50.

Middle Eastern wars in places like Yemen, Syria, and Iraq have been particularly hard on the ancient Christian communities that exist among the Islamic majorities.  Legions of men, women, and children have been slaughtered, maimed, and/or displaced.

Yet the world utters virtually a peep.  Pope Francis, for example, the Pope of my church, while he has indeed commented here and there on the oppression of Christians, he may as well have said nothing, for the Pope’s remarks on this matter have been like whispers relative to the pleas that he makes incessantly on behalf of Islamic refugees.

And while the leftist media in the West seeks to establish a connection between the beginning of Ramadan and Jeremy Christian’s insulting of two Islamic women, over in Egypt some Muslims inaugurated the holy month by…slaughtering dozens of Christian men, women, and children.

The most recent outrage committed against Christians occurred on May 26 in Egypt.  Islamic terrorists attacked a bus full of Coptic Christians, murdering 28 and injuring many more.  Children were among the victims.

The victims were reportedly heading to St. Samuel the Confessor monastery when their bus was blocked by three vehicles and eight to ten assailants wearing military uniforms and masks. The attackers proceeded to blast gunfire into the bus.

The so-called “Islamic State” (ISIS) claimed “credit” for the bloodbath.

In what now reads as ominously as it does presciently, an article published but two days before this attack at the website of Open Doors and authored by one of its Egyptian staff members speaks to the fever-pitch anxieties that the impending Islamic holiday of Ramadan have induced in the members of Egypt’s Christian community.  It is worth reading “Janelle P” in her own words:

“As much excitement as the Islamic holy month brings to Muslims, it does carry a great deal of burdens and concerns to the Christian community in Egypt.  It is a very long 30 days during which Christians in schools, work or public spaces will receive harsh looks and verbal harassments from devout Muslims because of their faith.  They are ridiculed for not fasting like Muslims.  Even in some cases, Christians may face physical violence due to the fact that they were caught eating their lunch by their fasting Muslim coworkers or neighbors!”

Think about this: Due to the celebration of an Islamic holiday, Christians have to brave insults, hostility, and even physical violence.

“It’s not uncommon for Christians to hide somewhere to eat their lunches away from the eyes of the Muslims.” Janelle recalls his own experiences growing up in Egypt. “I remember as a young boy having to eat and drink in the school toilet to avoid trouble with Muslim classmates and teachers.”

Young Christian children must take shelter in school restrooms if they want to eat their lunch unmolested by their Islamic classmates.

“It’s almost protocol during the month of Ramadan for devout Muslims, wherever they are, to turn to the Christians around them and bombard them with intimidating questions about their faith. They aim to distract themselves from the long fasting hours and, if they’re lucky enough, to plant doubt in the hearts of the Christians.”

Janelle P concludes by acknowledging that “We, the Christians of Egypt, feel many different emotions regarding Ramadan.” However, he presumably speaks for his coreligionists in Egypt when Janelle expresses, not rage or hatred, but rather faith that God will show Muslims the error of their ways and bring them to Him.  It is this, at any rate, for which they pray.

The attitude of love that the most oppressed Christians hold toward their Islamic oppressors stands in glaring contrast to that which Muslims have toward those who do not share their vision.

Of course, the point here is not to suggest that all of the world’s billion or so Muslims deserve to be condemned for the actions of the exploitative, oppressive, and murderous among them.  Such a suggestion is unwarranted.  Nor it would be right to suggest that no Muslims experience persecution. There are indeed persecuted Muslims throughout the world, but the persecution that they suffer is almost without exception at the hands of other Muslims.

The point of this essay is to puncture the West’s Politically Correct meme, an ideologically-useful fiction according to which Muslims are always victims and Christians are victimizers—or, at the very least, are never victimized.

The painful reality is that, globally speaking, when it comes to the topic of religious persecution, the adherents of Islam are the biggest persecutors while those of Christianity are victimized more so than the members of any other religious faith.