Qatar’s citizens may still be barred from Mecca 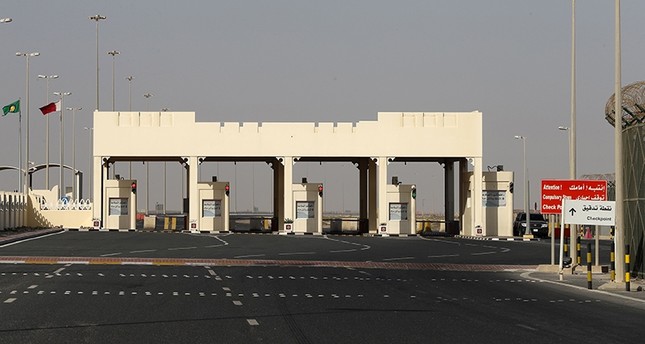 This file photo taken on June 23, 2017 shows a general view of the Qatari side of the Abu Samrah border crossing with Saudi Arabia. (AFP Photo)

Only dozens of Qatari citizens were able to travel to Saudi Arabia for this week’s hajj pilgrimage to Islam’s holiest sites because of the increasingly bitter crisis between the Gulf neighbors.

The annual pilgrimage that draws two million Muslim faithful from across the globe and starts this year Wednesday has become embroiled in a dispute between Doha and Riyadh now nearing its third month.

Qatar’s only land border, which it shares with Saudi Arabia, has been closed and travel, diplomatic and economic sanctions imposed over charges that Doha supports ”terrorists” and has too close ties to Riyadh’s regional rival Iran.

Doha has strongly denied the accusations.

Impacting on the hajj, only a few dozen Qatari nationals have been able to travel to Mecca and Medina, western Saudi Arabia, according to a member of Qatar’s state-linked National Human Rights Committee (NHRC).

Media reports in Saudi Arabia have put the number at up to 1,200 Qataris.

In sharp contrast, 12,000 Qataris took part in last year’s hajj, a pillar of Islam that capable Muslims must perform at least once in their lives, according to the state-run Qatar News Agency.

Saudi Arabia temporarily suspended the border closure on August 17, at the same time as it announced Qatari pilgrims would be allowed into the kingdom for the hajj.

But the offer soon became mired in the diplomatic spat, with Qatar charging that Saudi authorities had politicized a religious right.

The Saudi carrier accused Qatar of refusing to allow its planes to land in the emirate on the grounds that they lacked ”the right paperwork.”

In response, Qatar said the Saudi airline had lodged the papers with the wrong government department.

The decision to reopen the border came a day after a surprise meeting between Saudi Crown Prince Mohammed bin Salman and a little-known member of Qatar’s royal family, sparking allegations Riyadh was seeking regime change in Doha.

In past years, most Qatari pilgrims traveled to Mecca, crossing the width of Saudi Arabia, in officially-sanctioned groups.

Those who crossed into Saudi Arabia this year have traveled privately, ignoring official Qatari warnings over the treatment they could receive in the kingdom.

Doha has said it is worried about potential ”harassment” of Qatari pilgrims who make the journey to Mecca.

Some 2,400 pilgrims were originally due to travel from Qatar through official operators, although 24,000 people had applied, according to the NHRC.

The committee said eight companies, which planned to transport pilgrims, had lost 30 million riyals ($8.2 million) in potential earnings due to the Saudi ”restrictions.”

Qatar has said it would seek a total of billions of dollars in compensation for the sanctions enforced since June by Saudi Arabia and its allies, the UAE, Bahrain and Egypt.