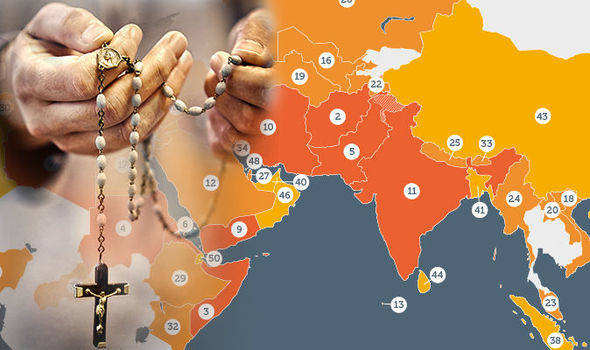 North Korea has been named as the worst place to be a Christian in the world, with Kim Jong-un’s hermit state topping Open Doors’ 2018 watchlist.While the torturous totalitarian regime regularly features at the top of the terrifying list, Open Doors gave a new stark warning for Christians in South East Asia, which they named the “next emerging perception hotbed”.

North Korea has topped Open Doors’ yearly list of worst states for the 16th year running with Saudi Arabia and Somalia the only two other states to have been ranked first during the 26 years Open Doors has been creating the list.

The Open Doors report said: “North Korea remains the most dangerous place in the world to be a Christian. Believers are forced to worship in secret – if they are discovered they are taken to labour camps. 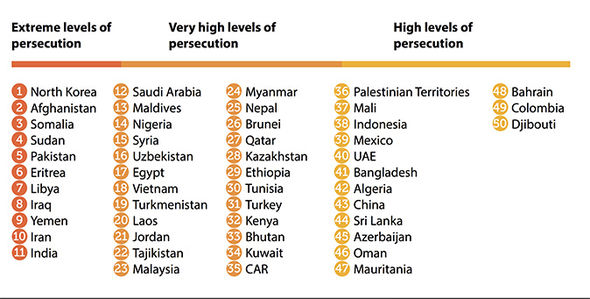 “An estimated 70,000 Christians are believed to be in these camps. Last year, North Korea saw a further increase in the threat to Christians – the North Korean regime has been monitoring the border with China closely and raiding safe houses where Christian converts have sought refuge.“Christians who are discovered are sent back to North Korean camps where they face appalling conditions and are subject to torture, and many die.”

The majority of nations at the top of the list are in the Middle East or North Africa, including Afghanistan, Pakistan, Libya, Iraq, Yemen and Iran. Somalia, Sudan, Eritrea and India complete the top 10.

Egypt is another fast-riser on the list, which analyses threats of violence, private life, family, community, national circumstances and church life. 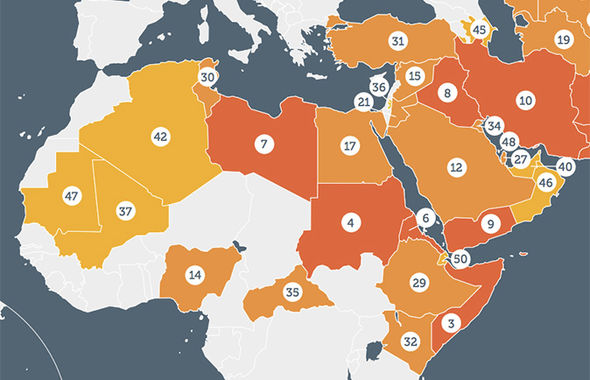 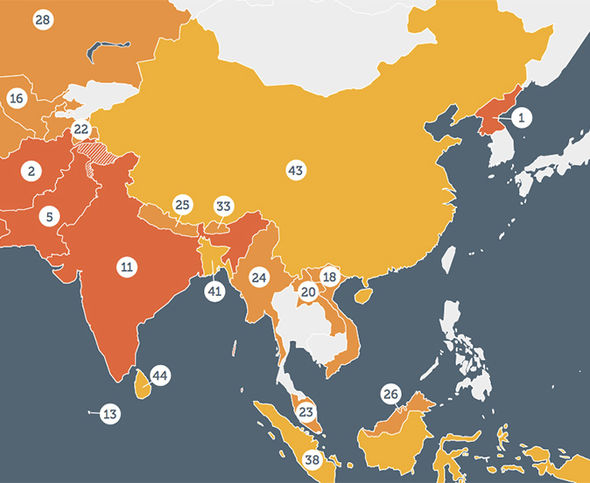 The country ranked as the 17th-worst country to be a Christian after a year of violence and attacks.Open Doors said: “In 2017 there were several horrific violent incidents across Egypt: at Easter, 49 people were killed in two church bombings; in May, Islamic extremists attacked people travelling to a monastery in Upper Egypt – killing 29.

“In Minya governorate alone, over 15 girls have been kidnapped in the last year with the aim of forcing them to marry a Muslim husband and convert to Islam. It is not possible to change your religion from Islam to Christianity on your identity card in Egypt.”

This difficulty to convert, and the highly-public nature of religion in the country, was further highlighted by Open Doors UK and Ireland CEO Lisa Pearce. 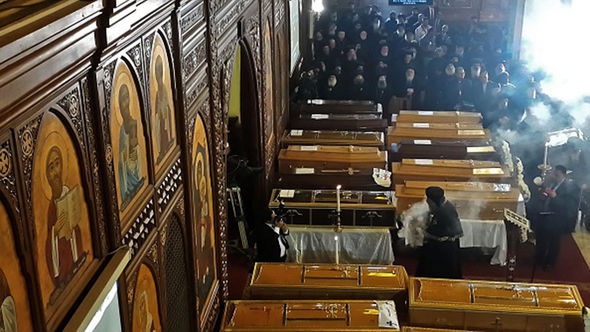 She said: “Christians in Egypt face a barrage of discrimination and intimidation yet they refuse to give up their faith. It is hard for us here in the UK and Ireland to imagine being defined by our religion every single day in every sphere of life.“In Egypt, as in many other Middle Eastern countries, your religion is stated on your identity card. This makes discrimination and persecution easy – you are overlooked for jobs, planning permits are hard to obtain and you are a target when you go to church.”

Turkey, too, was singled out as a particularly bad place to be a Christian. Bordering Europe, the country ranked 31st after a year marked by civil rights crackdowns.

Open Doors warned: “Violence perpetrated by Islamic extremists is raising levels of fear and intimidation, and the overspill of Islamic terrorists driven out of Iraq and Syria has heralded an increase in the level of threat in Egypt and Turkey.

“Turkey was not on the Open Doors World Watch List in 2014, entered in 2015 ranked 41, and in 2018 is ranked 31 with an increase of 10 persecution points.”Africa was also highlighted due to the growing threat of Islamic extremism in the regions, with Christians in Nigeria threatened by “extreme levels” of violence.