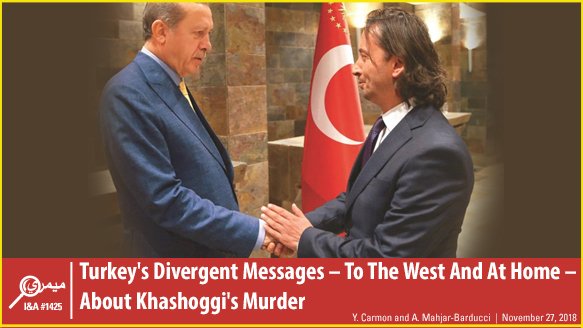 By: Yigal Carmon and Anna Mahjar-Barducci*

In addressing the West about the October 2, 2018 murder of Jamal Khashoggi at the Saudi consulate in Istanbul,  Turkish President Recep Tayyip Erdogan presents the need for strong measures against Saudi Crown Prince Mohammad bin Salman personally, as a human imperative and a vital defense of freedom of speech. However, unbeknownst to the West, Erdogan speaks to the Turks in a totally different way, via Ibrahim Karagul, his confidant and the editor of the regime’s mouthpiece, the Yeni Safak daily.

Long before Khashoggi set foot in the Saudi consulate that day, the Turkish regime was preparing Turkish public opinion for war with Saudi Arabia and the UAE – depicting them as the core enemy and the tool of an old-new anti-Turkey axis comprising also the U.S., the U.K., and Israel and aimed at ejecting Turkey from the Arab world. This is framed by Karagul as a repeat of the events of a hundred years ago, when the Sharif of Mecca, Hussein bin Ali, aligned with the British against the Ottoman Empire and removed it from the Arab world. Karagul presents today’s Turkey as a reincarnation of the Ottoman Empire of a century ago.[1]

On April 7, 2018, Karagul had already explained the Trump administration’s decision to maintain forces in Syria as follows: ”The [U.S.] garrison zone realized in northern Syria is part of the plan to separate between Arab and non-Arab Muslims. This is why [Mohammad bin] Salman and [Mohammad bin] Zayed want U.S. troops’ presence in this zone to continue; this is why they are trying to create a thick ‘Iron Curtain’ between Turkey and the Arab world; [and] this is why they are openly supporting the Kurdistan Workers Party’s (PKK) Syrian affiliate, the Democratic Union Party (PYD), in this zone.”

Karagul continued: ”So what kind of multinational project against Turkey are Saudi Arabia’s crown prince and the UAE’s Crown Prince Mohammed bin Zayed involved in? Both their anti-Turkey sentiments have now transformed into enmity. But the issue is far beyond their personal views; it is related to a new project with a region design that is shaped by the motto ‘stop Turkey,’ and a U.S.-U.K.-Israel project aimed at severing ties between Turkey and the Arab/Muslim world.”

To that effect, in a November 19 article, Karagul predicted a political earthquake once the audio recordings of the murder were released:

”The conversations among the murderers, their conversations with Riyadh after committing the murder, dialogues that will prove the crown prince was the one who directly gave the order, perhaps the United Arab Emirates (UAE) and Egyptian intelligence’s role in the incident, and as a matter of fact, information on Israeli intelligence’s ‘expertise’ or on the U.S. leg of the murder may be revealed.”

Karagul added that the unraveling of the Khashoggi murder conspiracy can tip the balance against Mohammad bin Salman and Mohammad bin Zayed – but that nothing will change in the region as long as Mohammad bin Zayed is in power. ”He is the boss behind all this business. We are going to continue to write about him, discuss him, and reveal his evils,” he concluded. (For more on Erdogan’s leveraging of the Khashoggi murder, see the upcoming MEMRI Special Dispatch translations from Yeni Safak.)

Against this backdrop, it is possible to understand why Turkey did not prevent the Khashoggi murder – even though, based on the series of leaks by the Turks themselves about what occurred in the days leading up to the murder as well as on the day of the murder itself, Turkey knew very well that Khashoggi was in danger. Yet it did nothing either to warn him or to apprise the Saudis that it was on to them. Either could have prevented the murder.

Turkey may have made a calculated decision to sacrifice the pawn Khashoggi in order to turn the entire West, and possibly the Arab world, against its arch-enemy Mohammad bin Salman – as well as against Mohammad bin Zayed, Israel, the U.K., and the U.S. – all of whom it accuses of involvement in the murder.[2]

*Y. Carmon is President of MEMRI; A. Mahjar-Barducci is Director of the MEMRI Russian Media Studies Project.

[1] Erdogan is cultivating this connection between today’s Turkey and the Ottoman Empire both symbolically and by means of his diplomatic and military policy in Syria and against Greece.