Source: Trump says US troops will remain in Middle East for Israel’s sake | The Times of Israel

US president notes he could lower military presence in region as cheaper oil leads to reduced reliance on Saudi Arabia, but will not, partly due to concerns for Israel’s security 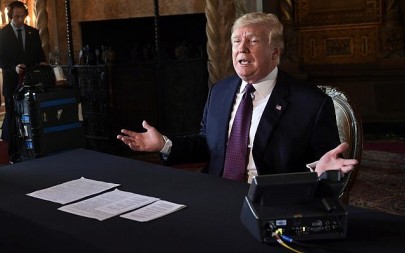 US President Donald Trump said in an interview published Wednesday that, although he could remove troops from the Middle East, citing cheaper oil as an explanation, one reason not to do so is concern for Israel’s security.

“Now, are we going to stay in that part of the world? One reason to is Israel,” Trump told the Washington Post.

“Oil is becoming less and less of a reason because we’re producing more oil now than we’ve ever produced,” he added, appearing to envision a world where the US would be less beholden to Saudi Arabia. “So, you know, all of a sudden it gets to a point where you don’t have to stay there.”

Trump publicly thanked Riyadh last week for plunging oil prices, after he was harshly criticized for deciding not to further punish the kingdom for the killing of US-based columnist Jamal Khashoggi. 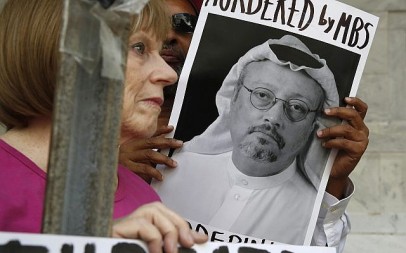 People hold signs during a protest at the Embassy of Saudi Arabia about the disappearance of Saudi journalist Jamal Khashoggi, in Washington, DC, on October 10, 2018. (AP Photo/Jacquelyn Martin, File)

Trump last week suggested that Israel would face major regional difficulties in the Middle East were it not for the stabilizing presence of Saudi Arabia, explaining his decision not to take measures against Riyadh.

“Israel would be in big trouble without Saudi Arabia,” Trump told reporters at the time from his Mar-a-Lago resort home in Florida.

During the wide-ranging interview, Trump also threatened to cancel an upcoming meeting with Russian President Vladimir Putin over the captureof three Ukrainian ships and their crew in the Black Sea this week.

Ukraine’s parliament voted Monday to impose martial law in parts of the country to fight what its president called “growing aggression” from Moscow, after the weekend naval clash off the disputed Crimean Peninsula, in which Russia fired on and seized three Ukrainian vessels, amid renewed tensions between the neighbors.

Western leaders and diplomats have urged both sides to deescalate the conflict, and the US has blamed Russia for what it called “unlawful conduct” over Sunday’s incident in the Black Sea.

Three Ukrainian ships are seen as they docked after been seized, in Kerch, Crimea, November 25, 2018. (AP Photo)

Trump said he was awaiting a “full report” by his national security team on the matter: “That will be very determinative. Maybe I won’t have the meeting.”

The US president reiterated his rejection of a federal government reportreleased last week that concluded that damage from global warming was intensifying, saying he does not believe the scientific consensus that the crisis is man-made.

“One of the problems [is] that a lot of people like myself, we have very high levels of intelligence, but we’re not necessarily such believers,” Trump told the Washington Post. “You look at our air and our water, and it’s right now at a record clean.”

Much of the interview was dedicated to Trump’s criticism of Federal Reserve Chair Jerome Powell, nominated by the president last year. Trump said he was “not even a little bit happy with my selection” so far, but the report detailed an unorthodox reason for his decision not to reappoint predecessor Janet Yellen — her height.

The 5-foot-3-inch (160-centimeter) economist, who is Jewish, is “not tall enough” to lead the country’s central bank, Trump told aides on the National Economic Council on several occasions, the newspaper said, citing current and former officials. The officials said Trump had also asked them whether they agreed with his opinion on her height.

Times of Israel staff and agencies contributed to this report.

Benjamin Netanyahu: "We've seen this before. There was a master race. Now there's a master faith." - "Islam is as dangerous in a man as rabies in a dog." Sir Winston Churchill
Visa alla inlägg av Peter →
Detta inlägg publicerades i Israel, USA. Bokmärk permalänken.