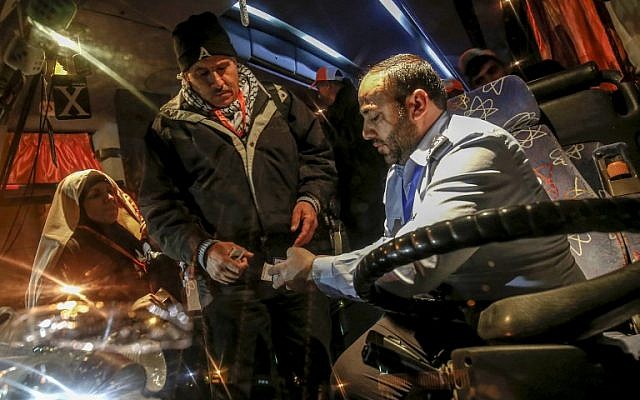 A Hamas police officer checks the travel documents of incoming Muslim pilgrims boarding a bus at the Rafah border crossing between the Gaza Strip and Egypt on March 3, 2019. (SAID KHATIB / AFP)

Some 800 Palestinians crossed Sunday from the Gaza Strip into Egypt on the initial stage of a pilgrimage to Mecca, the first time since 2014 Egyptian authorities have granted visas for such trips.

The pilgrims left at around dawn and were to be met by buses on the Egyptian side to bring them to Cairo’s airport, from where they would fly to Mecca in Saudi Arabia, said a Palestinian official at the Rafah crossing in the Gaza Strip.

Fifteen Gazans among the 800 were not authorized to cross, according to a Palestinian security official at Rafah, without providing the reasons.

Security sources on the Egyptian side of the Rafah crossing confirmed it was the first such permission for the Muslim umrah pilgrimage since the start of Egyptian military operations in northern Sinai in 2014.

Umrah is the lesser pilgrimage to Mecca that can be completed throughout the year, as opposed to the annual hajj pilgrimage. 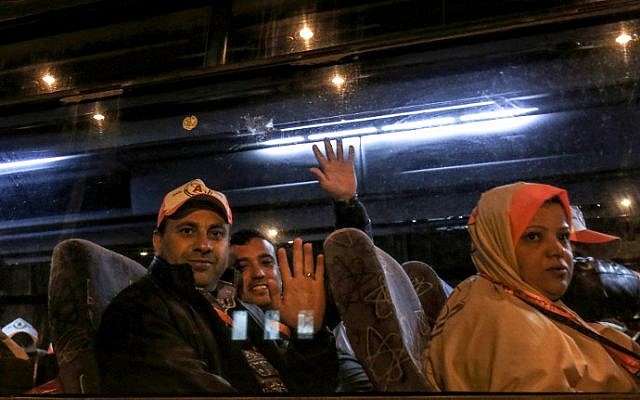 Muslim pilgrims wave to their relatives as they sit in a bus at the Rafah border crossing between the Gaza Strip and Egypt on March 3, 2019. (SAID KHATIB / AFP)

Around 2,500 pilgrims are authorized annually to leave Gaza via Egypt for the hajj, one of the five pillars of Islam that Muslims must undertake at least once in their lifetime.

Since the overthrow of Islamist president Mohamed Morsi in 2013, Egypt has faced a jihadist insurgency in North Sinai.

Last year, Egypt’s military launched a major offensive against the Sinai jihadists, though Cairo has for years considered the entire area a security priority.

Israel and Egypt imposed a blockade on Gaza after the Hamas terrorist group took over in 2007. Imposed to prevent arms from reaching Hamas, an Islamist terror group which avowedly seeks Israel’s destruction, the blockade has devastated Gaza’s economy and made it all but impossible for Palestinians to leave the Strip. 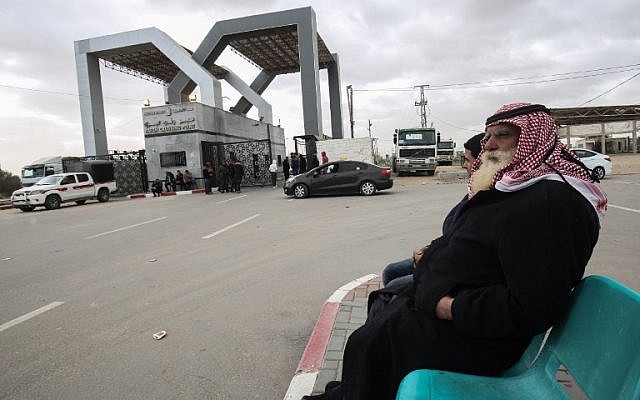 In this file photo taken on January 8, 2019, Palestinians sit waiting at the Rafah border crossing with Egypt, in the southern Gaza Strip. (SAID KHATIB / AFP)

The Rafah crossing with Egypt is the only one out of Gaza not controlled by Israel. For a substantial part of the past decade, Egypt has kept the crossing closed, but reopened it 10 months ago.

In January, Egypt briefly shuttered Rafah over a spat between Hamas and Palestinian Authority border officials. After PA withdrew its employees, Hamas and other Gaza-base officials said that promised them the crossing would reopen on a regular basis in the near future.

According to reports in Hebrew-language media, Egypt last month offered Hamas to permanently reopen Rafah if the Gaza rulers reined in clashes with Israeli troops.

Around 300 travelers use the Rafah crossing in either direction on a daily basis, according to figures dating to December provided by Israeli NGO Gisha.