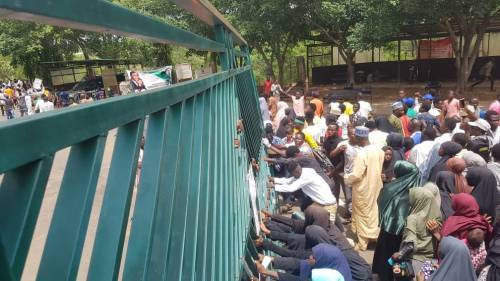 A member of the House of Representatives, Rep. Abdulrazak Namdas (APC-Adamawa) has condemned invasion of the National Assembly Complex by Shiite protesters on Tuesday.

Namdas, a member of the House Ad hoc Committee on Media and Publicity, condemned the invasion in a phone interview with the News Agency of Nigeria (NAN) in Abuja.

Earlier, members of the Islamic Movement of Nigeria also known as Shiites invaded the complex, demanding the release of their leader, Ibrahim El Zarkaky.

The protesters broke through the first gate near the Federal Secretariat, clashing with security operatives in the process.

The violent protesters used stones and woods to vandalise police and private vehicles at the arena and broke glasses on the assembly security post.

Some policemen who were wounded in the process were rushed to the NASS clinic for treatment.

There was confusion in the complex as workers and visitors fled in different directions for safety.

The Speaker of the House of Representatives, Mr Femi Gbajabiamila (Lagos-APC) adjourned plenary impromptu, citing security and legislative reasons for the adjournment. (NAN)