In 2015, at the height of the migration crisis, Greece and its islands stood out for their hospitality and solidarity. Today, as 13,000 migrants crowd the Turkish land border … 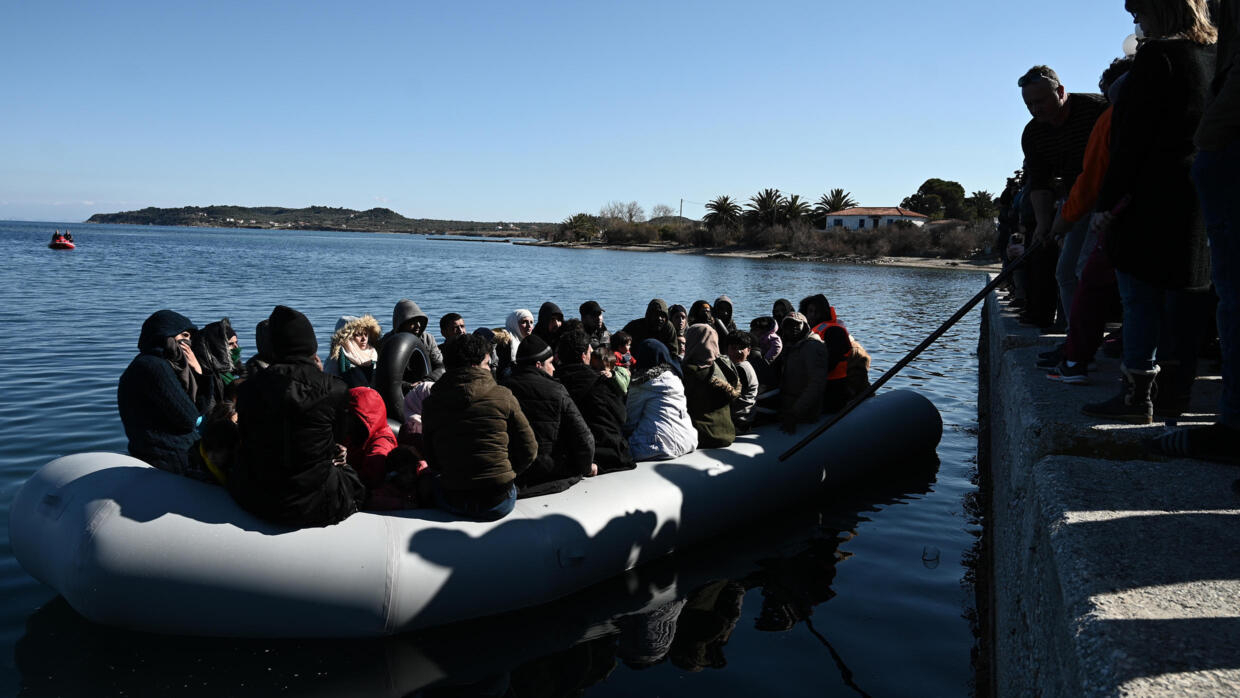 ”The people of Lesbos have left their problems behind to help the refugees.” We are in March 2016 and it is the mayor of Mytilene, Spiros Galinos, who speaks to us during a report by France 24 on the migration crisis in Greece. The agreement between the EU and Turkey has just been signed, promising to stem migratory flows to Europe. And the Greece of Alexis Tsipras, yet in the midst of an economic crisis, is illustrated by its humanity in the reception policy.

Lesbos, on the front line, opens its ribs to drifting boats. Solidarity projects are multiplying, aid workers are pouring in and even cemeteries are making space for victims of the sea. However, concern is already beginning to emerge. ”If the migrants continue to arrive and are trapped, this will generate fear. And fear is not a good adviser for anyone,” predicts Spiros Galinos. He would have preferred not to be the ominous bird.

The ”philoxenia” – Greek tradition of welcoming foreigners – was followed by fear, then hostility. Faced with the fragile situation in Syria and the opening of Turkish borders to Europe, which precipitated this weekend more than 13,000 people at the gates of Greece, according to the International Organization for Migration (IOM) ), Athens went on high alert Sunday, March 1.

”Do not try to enter Greece illegally, you will be turned back”

Greek authorities have announced the color: ”Do not try to enter Greece illegally, you will be turned back,” warned Conservative Prime Minister Kyriakos Mitsotakis on Twitter after a crisis meeting. The head of government also warned that no asylum application would be considered for a month and that any illegal entrant would be rejected.

Large numbers of Greek army forces have been deployed to Evros, one of the Turkish border posts. Amnesty International denounces ”excessive use of force and random tear gas in the crowd to prevent migrants from crossing the border.” Turkish President Recep Tayyip Erdogan for his part accused the Greek authorities of having killed two migrants who were trying to cross the border between Turkey and Greece.

These measures follow a series of announcements, in mid-February, hostile to migrants: starting with the installation of a floating wall, which would extend over 2.7 kilometers and measure 1 m 10 high, including 50 centimeters above the sea. Added to this is the reinforcement of naval patrols in the Aegean Sea, the acceleration of the procedure for examining asylum applications and the closure of reception centers. The latter, located on the islands of Lesbos, Chios, Kos, Leros and Samos, house some 36,000 migrants with a capacity of 6,200 places. Most of them try to survive in unsanitary conditions, without hygiene or sufficient food. And this while new arrivals are expected.

At least a thousand migrants from Turkey reached the Aegean islands, according to Greek police, the weekend of March 1. A flow which is likely to increase. ”Among the thousands of people who were at the border on Sunday, one part left for Istanbul, the other heads for Izmir, probably to take boats in the direction of the islands, notably Lesbos,” Joe Lowry told France 24. one of the IOM spokespersons.

But faced with the plight of the migrants, it is the anger of the islanders that rages. On March 1, 150 residents of Lesbos burned down an old – empty – UN reception center near Skala Sykamineas beach. Earlier, when cries of ”return to Turkey”, the inhabitants of the island prevented about fifty migrants, including several children, from docking with their canoe after several hours at sea. A journalist was attacked by residents while covering the event. The next day, the body of a child was found lifeless off the coast of Lesbos. 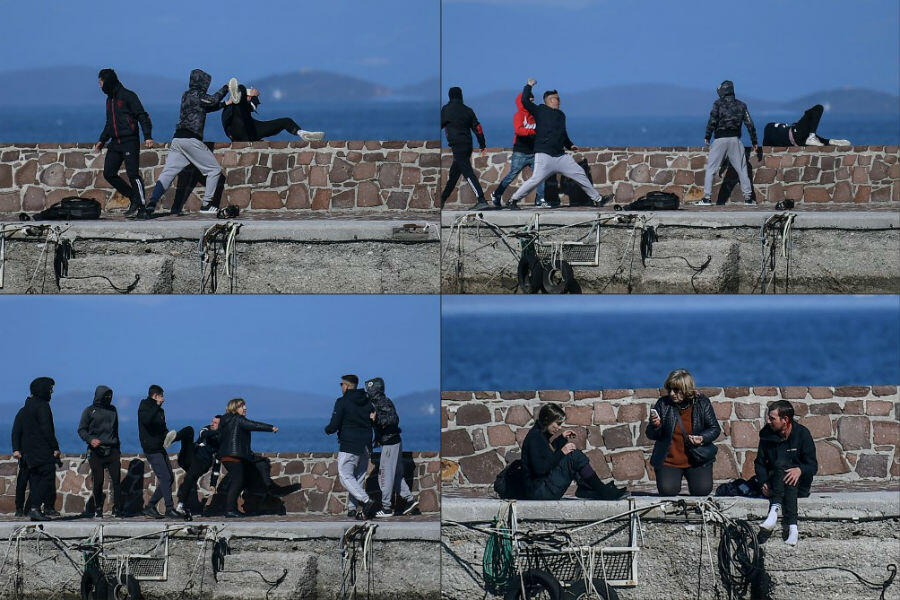 A journalist is attacked by residents of Lesbos who try to prevent a boat of migrants from landing on the island, on March 1, 2020. A woman then comes to his rescue. © AFPOn the road to Moria camp, another group of residents with chains and stones tried to prevent the police buses carrying asylum seekers, who arrived on Sunday, from accessing the reception and reception center. recording, says the Greek news agency ANA. Even aid workers find it difficult to work in these conditions and some have had to leave the island.

”Xenophobic” acts that remain the fact of a ”minority”, relativizes Eva Cossé, specialist in Greece for Human Rights Watch (HRW), interviewed by France 24. Solidarity continues on the island and the tradition of hospitality is not completely dead, she says, without however denying the tension of a population faced with a situation that has become ”out of control”. In four years, Lesbos has indeed become the symbol of European failure in terms of reception and migration policy.

”Lesbos has turned into a large prison center”

In 2015, while Lesbos is the scene of an unprecedented humanitarian drama, opens on the heights of the island, the ”hotspot” of Moria funded by European subsidies. The EU claims to relieve the countries of entry – mainly Greece and Italy – by setting up closed reception centers to quickly welcome, control and ”filter” migrants on their arrival in Europe. A relocation program has also been put in place to allow part of the refugees to be transferred to other Member States. In March 2016, the EU-Turkey agreement then comes to reinforce these measures: in exchange for 6 billion euros, Turkey undertakes to control the borders and recover the rejected asylum seekers.

From the point of view of figures, these measures are effective: in four years, the flow of migrants has dried up. Of the 860,000 people who arrived on the Greek coast in 2015, there are 45,000 in 2019, according to the IOM. However, for those who landed in Lesbos, the situation has only gotten worse. And as the mayor of Mytilene feared, those who were only passing through ended up staying, in alarming living conditions. ”In 2015, the migrants were only passing through Lesbos. Today, the migrants are stranded for months, even years, and the island has turned into a large prison center,” says Eva Cossé. 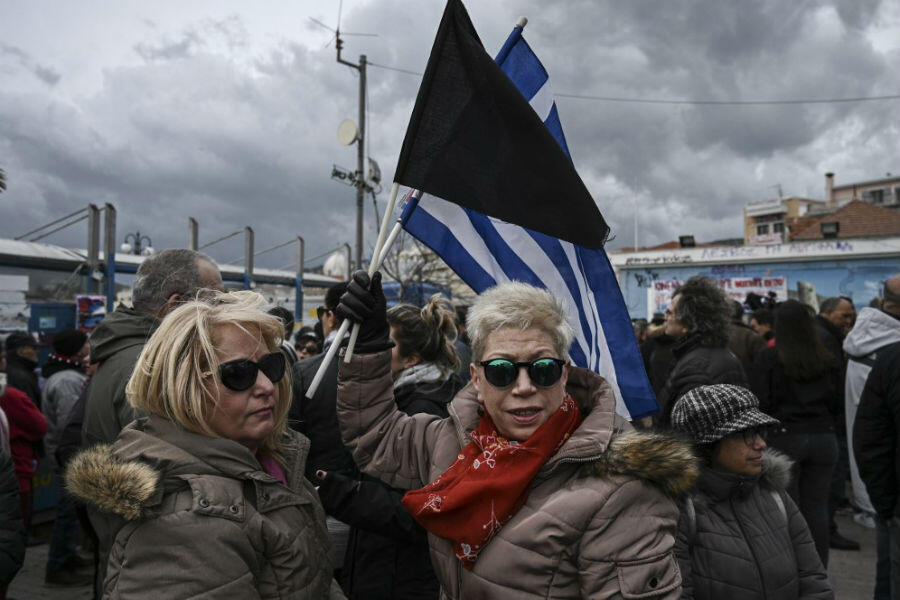 Residents of Lesbos demonstrate against the construction of a new migrant camp in Mytilene, February 27, 2020. © ARIS MESSINIS – AFPLack of European solidarity

Of the 100,000 relocations planned from Italy and Greece, 28% had indeed taken place two years later, according to the European Commission. Only Malta, Luxembourg and Finland have respected their commitments while others, such as Hungary, Poland and have not participated in the effort at all. As for France, it did not fulfill the contract: out of the 19,714 people it had committed to welcoming in 2015, 25.5% of asylum seekers had been relocated there three years later.

Furthermore, only Greece continued to play the game of island hotspots. Results, more than 20,000 crammed in Lesbos in a camp planned for 2,600 people and nearly 7,000 in Samos for a camp planned for 670. ”This is the fourth year of overcrowding but the numbers are only increasing It is this degradation that scares the inhabitants. They have the impression of being in ‘frontline’ and of being abandoned by Europe ”, analyzes Eva Cossé.

”Greece has benefited from financial aid, but it is now logistical aid which it needs and a real relocation policy”, continues the specialist. Emmanuel Macron assured Greece of his support and stressed his ”full solidarity” and his desire to ”lend them rapid assistance and protect the borders”. Promises that the people of Lesbos no longer dare to believe.