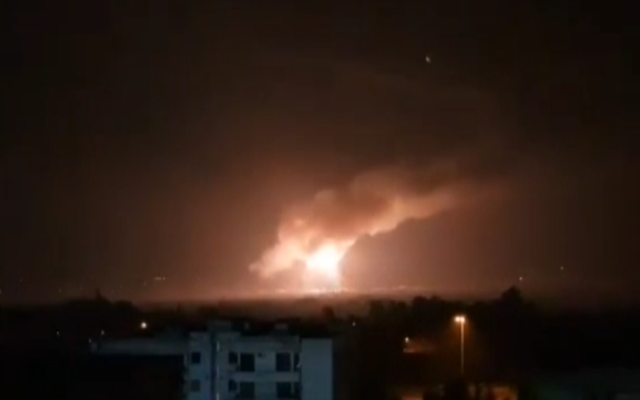 Illustrative: A fireball lights up the night sky near Damascus during an attack on a target near the capital on February 13, 2020. (Screen capture: Al-Ikhbariyah Syria TV)

Syrian state media on Monday night reported that air defenses were activated  against Israeli missiles over the ancient city of Palmyra in the Homs province.

The reports claimed missiles were shot down.

Though Israeli officials generally refrain from taking responsibility for specific strikes in Syria, they have acknowledged conducting hundreds to thousands of raids in the country since the start of the Syrian civil war in 2011. These have overwhelmingly been directed against Iran and its proxies, notably the Lebanese-based Hezbollah terror group, but the IDF has also carried out strikes on Syrian air defenses when those batteries have fired at Israeli jets.

“Air defenses confronted an Israeli aggression over Palmyra and intercepted several hostile missiles,” SANA said. The missiles were downed before they could hit their targets, it added.

The Syrian Observatory for Human Rights, a Britain-based war monitor, said the targets were “military posts for Iranian militias in the Palmyra desert.”

The monitor did not report any casualties.

Jerusalem says Iran’s presence in Syria, where it is fighting in support of President Bashar Assad, is a threat, as Tehran seeks to establish a permanent foothold along Israel’s northern borders.

The latest alleged attack came only hours after Iranian Foreign Minister Mohammad Javad Zarif met with Assad in Damascus to discuss regional developments in light of the outbreak of the novel coronavirus.