As Iran vows enrichment to 60%, White House says diplomacy the only way forward

As Iran vows enrichment to 60%, White House says diplomacy the only way forward

US condemns Tehran’s ‘provocative’ announcement it’ll increase uranium purity to 60%; Israeli analyst: With Natanz out of commission, enrichment at those levels will be limited

The White House said Tuesday it remains committed to nuclear negotiations with Tehran despite the Islamic Republic’s “provocative” statement that it will ramp up uranium enrichment, amid high tensions in the Middle East and alleged tit-for-tat attacks between Israel and Iran.

“We believe that the diplomatic path is the only path forward here and that having a discussion, even indirect, is the best way to come to a resolution,” she said.

The meeting came as a flurry of escalations in Iran and at sea threatened to derail ongoing talks aimed at rescuing Iran’s 2015 nuclear deal. The Biden administration opened indirect talks with Iran over the deal last week. 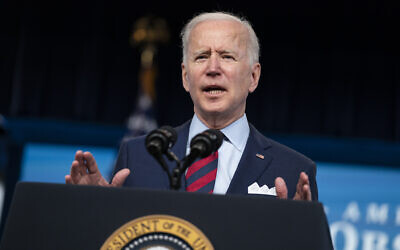 US President Joe Biden speaks in the South Court Auditorium on the White House campus, in Washington, April 7, 2021. (Evan Vucci/AP)

The nuclear talks in Vienna were set to resume Wednesday, but Russia’s ambassador to the UN said they had been postponed by a day. Russia is a signatory of the deal.

On Tuesday, Iran said it was stepping up uranium enrichment to an unprecedented 60 percent and installing new centrifuges in response to a Sunday attack on its Natanz nuclear facility, which it has blamed on Israel. Washington has denied any involvement. The 60% step will bring Iran closer to the 90 percent purity threshold for military use and shorten its potential “breakout time” to build an atomic bomb.

Iran has threatened Israel over the strike, and an Israeli-owned ship was attacked in the Gulf of Oman Tuesday, the latest incident in the shadow maritime war between Tehran and Jerusalem.

The details of the Natanz incident and extent of the damage are still murky. The event was initially described only as a blackout in the electrical grid feeding above-ground workshops and underground enrichment halls, but later Iranian officials began referring to it as an attack, and an Iranian official on Monday specified that it was a blast that knocked out the plant’s primary and backup power.

Iran’s Foreign Ministry said it damaged some of Iran’s first-generation IR-1 centrifuges, the workhorse of its nuclear program. Unsourced Israeli media reports have claimed that the entire plant, with some 6,000 centrifuges, remains out of action, and that various kinds of centrifuges, included advanced ones, were damaged. 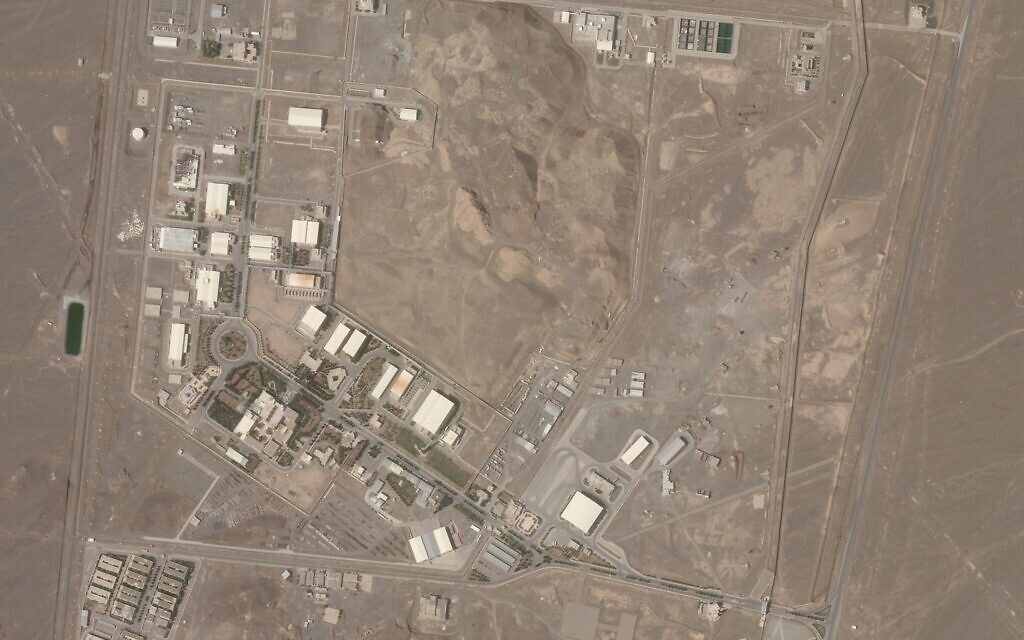 An Israeli TV report on Tuesday said that Iran will only be able to enrich very small quantities of uranium to 60% since Natanz is still out of commission following the Sunday attack.

Channel 13 analyst Alon Ben David said that despite Iranian officials’ vow to begin the higher enrichment process on Wednesday, they cannot do it at Natanz, since the 6,000 centrifuges there remain inoperable.

There are 1,000 centrifuges at Iran’s Fordo nuclear facility that can enrich to 60% in very small quantities, which did not appear to constitute a significant threat, the Israeli analyst said.

Iran’s semi-official Fars news agency said its atomic energy agency will initiate preparatory steps to ramp up enrichment on Tuesday night. The report said the damaged IR-1 centrifuges will be replaced with new machines that have a higher capacity.

The International Atomic Energy Agency confirmed in a statement that Iran warned it will start enriching uranium up to 60% purity.

In a report to member states, the IAEA’s director-general, Rafael Mariano Grossi, “said Iran had informed the Agency that the country intends to start producing UF6 enriched up to 60 percent,” the statement said.

Zarif separately renewed his earlier warning to Israel over the sabotage, saying that if Iran determines its archenemy was behind it, “then Israel will get its response and will see what a stupid thing it has done.” 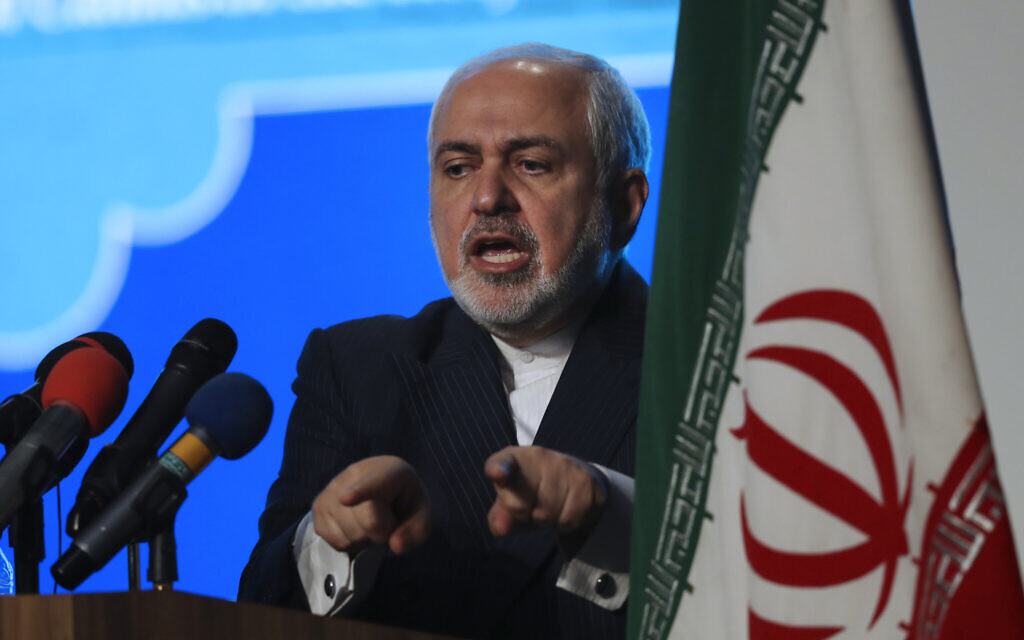 Nuclear negotiator Abbas Araghchi, in Vienna to begin informal talks Tuesday night, made a point to make his announcement in English.

“We believe this round of negotiations is the time for the US to present a list and I hope that I can go back to Tehran with the list of sanctions which should be lifted,” Araghchi told Iranian state television’s English-language arm Press TV. “Otherwise, I don’t believe we can continue like this. Otherwise, it would be a waste of time.”

He said authorities would install another 1,000 centrifuges at Natanz.

“The damaged centrifuges in Natanz… would be replaced with more-advanced centrifuges and more-capable centrifuges,” he said. “We insist on what we have asked. All sanctions should be lifted, we verify and then we go back to full compliance if we are satisfied with the verification process.”

Mikhail Ulyanov, Russia’s ambassador to the IAEA, said that “those who undertook an act of sabotage against the nuclear facility in Natanz probably wanted to undermine the process of” reviving the nuclear accord.

“They underestimated the possibility of significant ‘side effects,’” he tweeted. Russia is a member of the nuclear deal.

The move to 60% had been hinted at in the past. Iran’s supreme leader Ayatollah Ali Khamenei had threatened to go to that level in February. 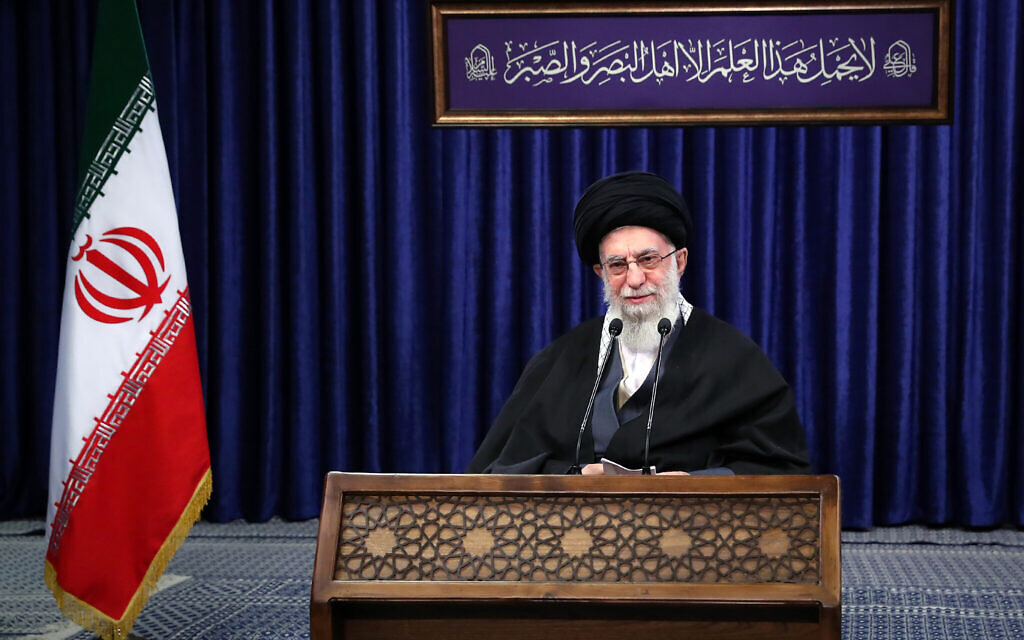 Iran previously had said it could use uranium enriched up to 60% for nuclear-powered ships. However, the Islamic Republic currently has no such ships in its navy.

Kayhan, a hard-line Tehran newspaper, urged Iran to “walk out of the Vienna talks, suspend all nuclear commitments, retaliate against Israel and identify and dismantle the domestic infiltration network behind the sabotage.”

Iran’s withdrawal from the talks remains unlikely as the administration of President Hassan Rouhani, whose main diplomatic achievement was the 2015 accord, hopes to get the US to rejoin it and provide desperately needed sanctions relief. But the announcement that it would enrich uranium further shows how pressure has been growing within Iran’s theocracy over how to respond to the attack.

Also Tuesday, an Israeli-owned ship, the Hyperion Ray, sustained minor damage in an attack near the United Arab Emirates, in the third incident of its kind in recent months. There was no immediate claim of responsibility for the strike, but officials in Jerusalem believe Iran is responsible, according to Hebrew media reports.

Tehran and Jerusalem are engaged in a maritime shadow war, with both sides blaming the other for explosions on vessels, marking a new front in the conflict that was previously carried out on land, by air, and with alleged espionage and cyberattacks.

The MV Saviz, an Iranian cargo ship said to serve as a floating base for Iran’s paramilitary Revolutionary Guard forces off the coast of Yemen, was struck by an explosion last Tuesday, likely from a limpet mine. 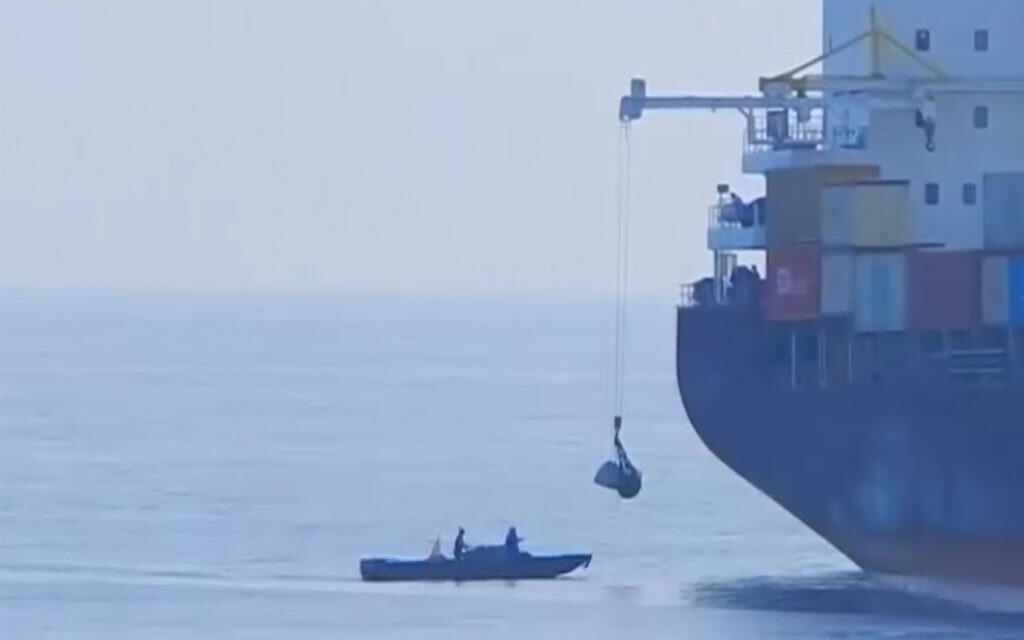 FILE: A suspicious boat off the stern of the Iranian ship ‘Saviz’ in the Red Sea in 2018. (Al Arabiya video screenshot/File)

The Biden administration has repeatedly said it will return to the 2015 nuclear deal if Iran first returns to compliance. Iran has taken a hardline approach, demanding the US lift all sanctions against it first, putting the two sides at a stalemate.

Officials from the US, Iran, and European intermediaries said talks in Vienna last week were “constructive,” but yielded little progress. US officials later voiced doubts about Iran’s seriousness in the talks.

Israeli officials, including Prime Minister Benjamin Netanyahu, have adamantly opposed the US returning to the nuclear deal, putting Jerusalem at odds with the new White House administration.

US and Israeli security officials held a bilateral strategic group meeting aimed at collaborating in the effort to prevent Iran from obtaining a nuclear weapon on Tuesday. The US stressed its commitment to preventing a nuclear-armed Iran during the virtual discussion and invited Israeli National Security Adviser Meir Ben-Shabbat to visit Washington in the coming weeks.