After initially restricting fishermen to sailing within 9 miles of the coast, Israel’s military liaison to Palestinians announces total closure as launches continue from Strip

Israel fully closed the Gaza fishing zone on Monday morning, forbidding Palestinians from sailing off the coast of the beleaguered enclave, after terrorists in the Strip launched five rockets toward southern Israel overnight.

It was the third straight night of rocket attacks from Gaza, raising the specter of wider conflict in the restive region and between Israel and Palestinians in general.https://imasdk.googleapis.com/js/core/bridge3.453.0_en.html#goog_1610735642

The closing of the fishing zone appeared to be Israel’s sole retaliation to the rocket attacks, with the Israel Defense Forces refraining from conducting airstrikes on the Hamas terror group in the Strip — its usual response to rocket fire.

The launches began at 10:45 p.m., with a rocket that struck an open field near the Gaza border, without triggering alarms in populated areas. Roughly an hour later, a second rocket was fired toward southern Israel, but it failed to clear the border and landed inside the Strip, according to the army. 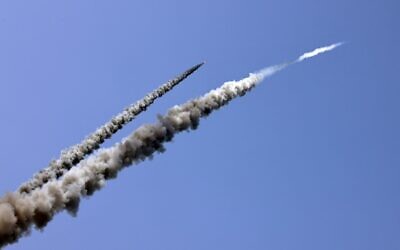 Rockets are fired toward the sea during a military drill by members of the Mujahideen Brigades, the armed wing of the Palestinian movement of the same name, along a beach off of Gaza City, on April 24, 2021. (Photo by MAHMUD HAMS / AFP)

Shortly after 3 a.m., terrorists in Gaza launched three rockets toward the town of Sderot and the surrounding area, triggering sirens in the communities. Two of these were intercepted by the Iron Dome missile defense system; the third landed inside Gaza, the Israel Defense Forces said.

Four people, including a pregnant woman, were lightly wounded after falling while running to bomb shelters in that attack, medics said.

After the initial two attacks, Israel’s military liaison to the Palestinians — known formally as the Coordinator of Government Activities in the Territories (COGAT) — announced that the military was restricting the Gaza fishing zone from its usual 15 nautical miles to nine nautical miles in light of the attacks.

However, after the third round of rocket launches in the predawn hours of Monday morning, the liaison Maj. Gen. Ghassan Alian announced that beginning at 6 a.m. on Monday, Israel was closing off the Gaza coast to Palestinian fishermen entirely.

“This is because of the continued rocket fire from the Gaza Strip at Israeli territory during the night,” COGAT said in a statement.

“Hamas bears responsibility for everything that happens in or originates from the Gaza Strip against Israel, and it will bear the consequences for the violence directed against Israeli citizens,” Alian said.

Fishing is a significant source of revenue for the enclave. The size of the fishing zone has varied over the years. It was set at 20 nautical miles by the Oslo peace accords in the 1990s before being reduced to six miles under the joint Israeli-Egyptian blockade imposed after Hamas took over the Strip in a violent coup against the Fatah-controlled Palestinian Authority in 2007.

Israel has raised and lowered the limit several times in recent years in a bid to pressure Hamas, the de facto ruler of the Gaza Strip.

The attacks on Sunday night and Monday morning came after Gazan terrorist groups launched over 40 rockets into Israel over the weekend. On Saturday, a number of Palestinian terror groups fired experimental rockets toward the Mediterranean Sea as a show of force.

Palestinian terror groups have said that the weekend’s rocket attacks were in response to ongoing unrest in Jerusalem, where Arab residents have demonstrated for several days against Ramadan restrictions on congregating near Jerusalem’s Damascus Gate. Those restrictions were lifted by police just over an hour before the rocket was fired, leading to some speculation that the launch had been a “celebratory” measure. 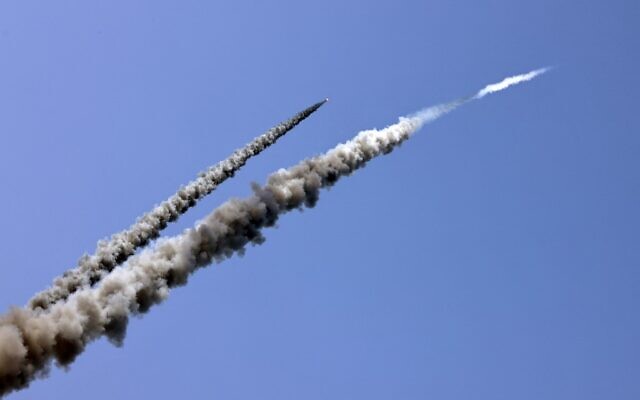 Rockets are fired toward the sea during a military drill by members of the Mujahideen Brigades, the armed wing of the Palestinian movement of the same name, along a beach off of Gaza City, on April 24, 2021. (MAHMUD HAMS / AFP)

Two Gaza factions, the Popular Front for the Liberation of Palestine and a branch of Fatah’s Al-Aqsa Martyrs’ Brigades, claimed responsibility for the Friday-Saturday rocket fire. But Israel holds Hamas directly responsible for all fire from the enclave into Israeli territory, charging that it takes place with the terror group’s consent.

The Hamas leadership earlier Sunday called East Jerusalemites to continue “mobilizing in the Old City and at its gates.” Hamas also said night patrols of Palestinians ought to be formed to protect East Jerusalem residents from assaults by Jewish extremists.

The widening circle of clashes has sparked concerns in Israel that the situation could escalate across the West Bank and Gaza.

Prime Minister Benjamin Netanyahu called Saturday for the military to “prepare for any scenario” with Gaza. Defense Minister Benny Gantz similarly said that the Israel Defense Forces “will do what is necessary so the calm is preserved,” following security consultations at defense headquarters in Tel Aviv.

The Israeli military notably refrained from conducting retaliatory strikes in the Gaza Strip on Saturday night as well as on Sunday night, in an apparent bid to ease tensions. Israel normally adopts a tit-for-tat strategy, responding to Gazan rocket fire by shelling Hamas observation posts or imposing restrictions on the Gaza Strip.

Times of Israel staff contributed to this report.