TV says incident came as IAF fighters departed area after alleged strike last week and they were not in danger; move could signal a significant shift in Moscow’s ties with Israel

According to the unsourced report, the incident occurred on Friday as the Israeli air force bombed several targets near the city of Masyaf in northwestern Syria.

On Friday night at least five people were killed and seven others were hurt in the alleged airstrike, Syria’s state news agency said. Other media in the country said six were killed, all crew members of a Pantsir air defense system who attempted to take down the Israeli missiles.

The report said the Syrian military fired off dozens of anti-aircraft missiles which have been largely ineffective at halting the hundreds of Israeli strikes on Syria in recent years.

However, this time the S-300 batteries also opened fire as the jets were departing the area and ultimately did not present a real threat to the IAF fighters, the report said, noting that Syria’s S-300 batteries are operated by the Russian military and cannot fire without their approval.

The report also said that the S-300 radar did not manage to lock onto the Israeli jets. 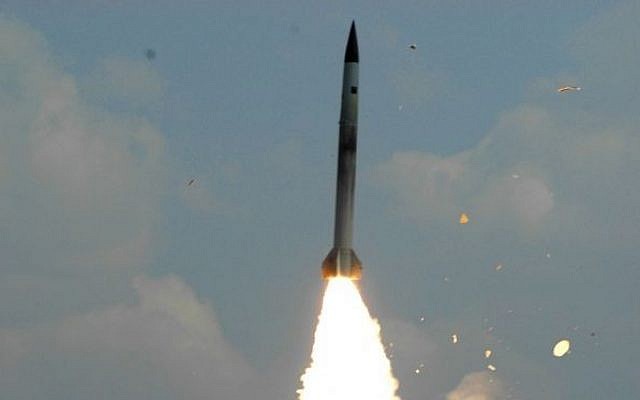 If confirmed, this would mark the first time such an incident has taken place and a concerning development for Israel which has carried out hundreds of airstrikes inside Syria in the course of the country’s civil war, targeting what it says are arms shipments bound for Lebanon’s Iran-backed Hezbollah terror group

Israel rarely acknowledges or discusses such operations and there was no confirmation of the raid or the S-300 launch from the IDF.

The Masyaf area is thought to be used as a base for Iranian forces and pro-Iranian militias and has been repeatedly targeted in recent years in attacks attributed to Israel.  Sattelite imagery taken after the strike showed that an underground facility had been completely destroyed. 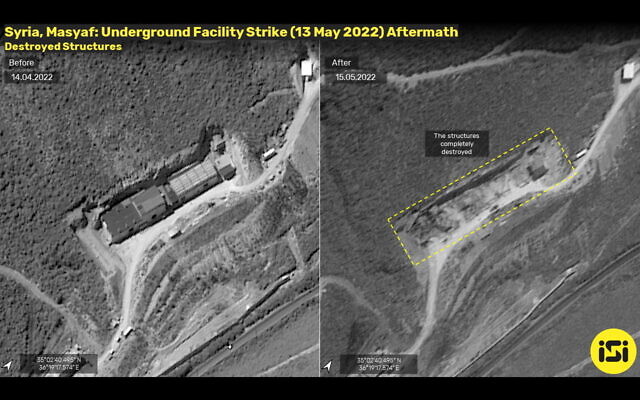 The report comes amid a deterioration in ties between Israel and Russia over the invasion of Ukraine. Israel has tried to walk a fine line between Moscow and Kyiv but has recently become more critical of Russia as evidence emerged of Russian atrocities and growing antisemitic rhetoric from Russian leaders.

Russia, a close ally of Syria’s Bashar Assad, has forces based and operating in Syria.

Beyond providing Syria with its air defenses, Moscow also maintains state-of-the-art S-400 air defense systems to protect its own assets in Syria, but has never turned them on Israeli planes.

Without specifically mentioning the incident, Defense Minister Benny Gantz on Monday said Israel would not be deterred and vowed to prevent Iran from transferring “advanced capabilities” to other entities in Syria.

“The State of Israel will continue to act against any enemy that threatens it, and prevent the transfer of advanced capabilities from Iran that endanger the citizens of Israel and harm the stability of the entire region,” Gantz said during a visit to the military’s Northern Command. 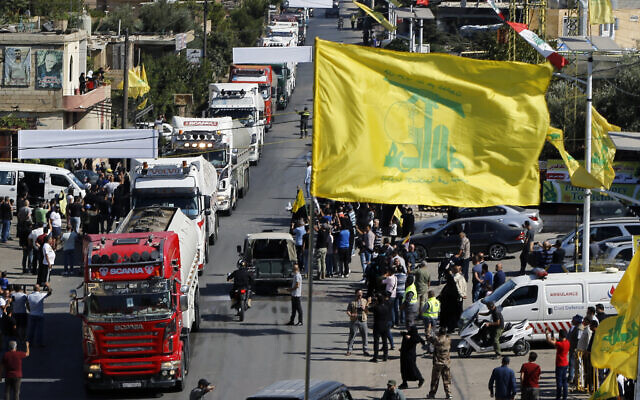 A convoy of tanker trucks carrying Iranian diesel across the border from Syria into Lebanon arrives at the eastern town of al-Ain, Lebanon, on September 16, 2021. (AP Photo/Bilal Hussein)

In recent years Israel and Russia established a so-called deconfliction hotline to keep the sides from getting tangled up and accidentally clashing over Syria.

While meeting in Sochi last year, Prime Minister Naftali Bennett and Russian President Vladimir Putin agreed that the two nations would continue to implement the mechanism.

Bennett said at the time that Israel’s relationship with Russia is “strategic” in nature and noted the importance of the “intimate discourse” with the Russian military.

Former prime minister Benjamin Netanyahu met Putin on multiple occasions to discuss the issue and claimed that their personal relationship was the main factor in keeping the mechanism in place.

The Channel 13 report said it was not immediately clear if the S-300 missile fire was a one-time event or if it was a Russian signal to Israel that they were changing their policy.

In 2018, Russia provided the advanced S-300 air defense system to Syria’s military free of charge, transferring three battalions with eight launchers each to the Assad regime despite strenuous objections from Israel and the US. 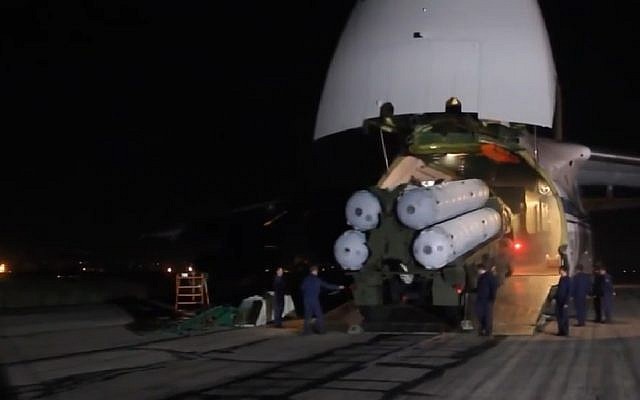 Russia’s delivery of the S-300 system to Syria follows the downing of a Russian spy aircraft by Syrian forces that were responding to an Israeli strike over Syrian airspace. Russia has blamed Israel for the incident, which killed 15 Russian crew members.

Israel and its allies for years have lobbied Russia not to give Syria and other regional players the S-300 system, arguing that it would limit Israel’s ability to neutralize threats, including by Hezbollah.