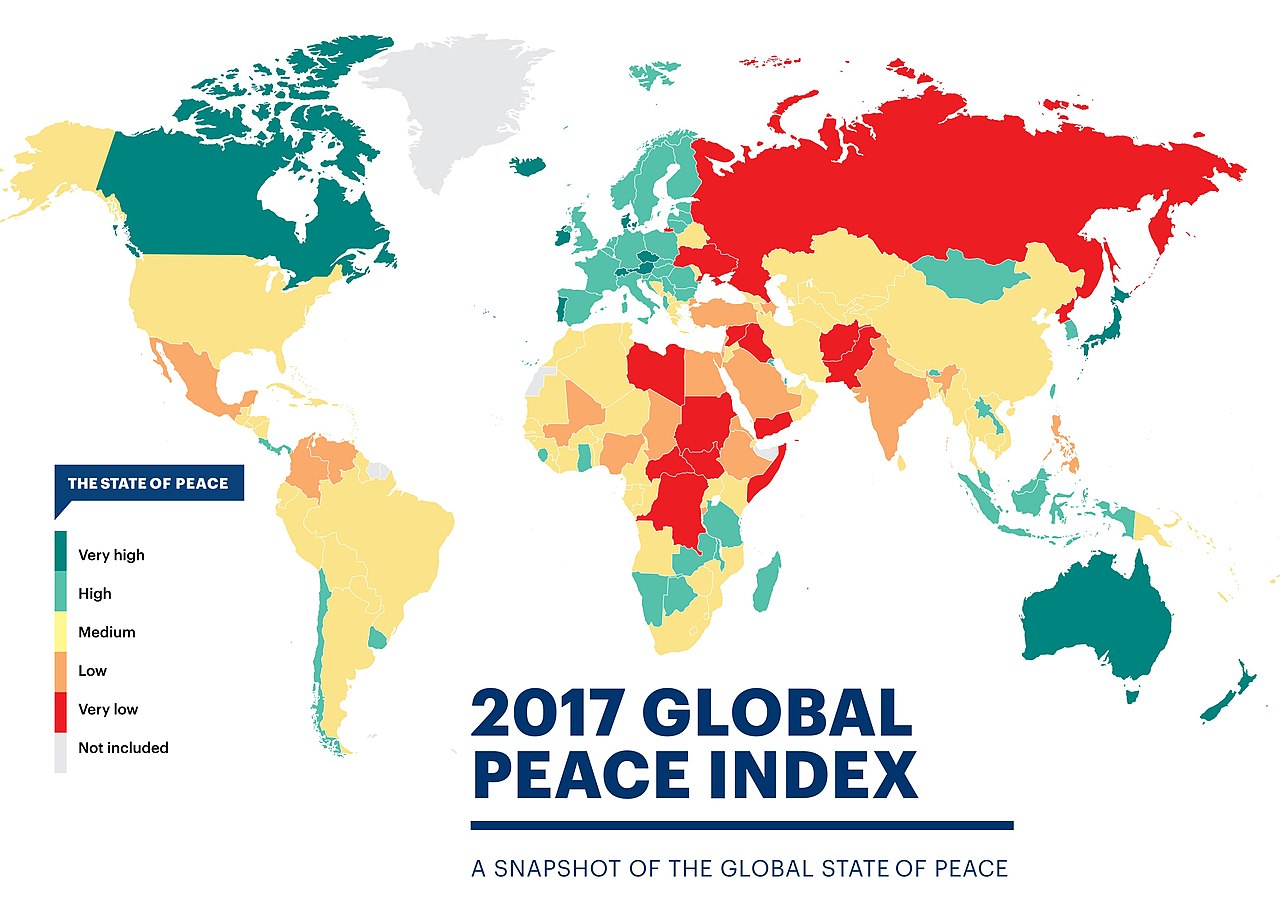 The 2017 Global Peace Index finds that the world became more peaceful in the last year, however, over the last decade it has become significantly less peaceful.

The 2017 GPI provides a comprehensive analysis on the state of peace. It shows that amidst continuing social and political turmoil, the world continues to spend enormous resources on creating and containing violence but very little on peace. The key to reversing the decline in peace is through building Positive Peace – a holistic framework of the key attitudes, institutions and structures which build peace in the long term. The 2017 GPI finds:

Most of the nations in the GPI became more peaceful over the last year. 93 countries improved while 68 deteriorated. Over the longer run however, there has been an increase in ‘peace inequality’, with most countries having only small increases in peacefulness, while a handful of countries have had very large deteriorations in peace.

Iceland remains the most peaceful country in the world, a position it has held since 2008. It is joined at the top of the index by New Zealand, Portugal, Austria, and Denmark, all of which were ranked highly in the 2016 GPI. There was also very little change at the bottom of the index. Syria remains the least peaceful country in the world, followed by Afghanistan, Iraq, South Sudan, and Yemen.

Iceland is joined at the top of the index by New Zealand, Portugal, Austria, and Denmark, all of which were ranked highly in the 2016 Global Peace Index.

The largest regional deteriorations in the score occurred in North America, followed by sub-Saharan Africa and the Middle East and North Africa (MENA). The score for North America deteriorated entirely as a result of the US, which more than offset a mild improvement in Canada. The US’s score has been dragged down largely because of a deterioration in several indicators: the homicide rate, level of perceived criminality in society and the intensity of organised internal conflict. The latter measure has deteriorated because of the increased levels of political polarisation within the US political system. The US also has experienced the fourth largest drop in Positive Peace globally, after Syria, Greece and Hungry in the ten years to 2015.

Europe remains the most peaceful region in the world, with eight of the ten most peaceful countries coming from this region. However, while 21 of the 34 countries improved, the average peace score did not change notably, due to the substantial deterioration in Turkey, the impact of the terrorist attacks in Belgium and France, and deteriorating relations between Russia and its Nordic neighbours.

The indicator with the largest improvement was number, duration and role in external conflicts. This was mainly due to many countries winding down their involvement in Iraq and Afghanistan. While in most cases the withdrawal of troops occurred some years ago, the indicator is lagging in order to capture the lingering effect of conflict. The indicator measuring political terror also significantly improved in all regions except sub-Saharan Africa and the MENA. There were also general reductions in the number of homicides per 100,000 people and the level of violent crime.

The heightened media attention on conflict in the Middle East, refugee flows and terrorism in Europe has meant several positive trends have not been as widely covered. Two of the more positive trends from the last decade are decreases in the homicide rate for 67 per cent of the countries covered and improvements in the Political Terror Scale which measures state sponsored violence, such as extra-judicial killings and torture, where 68 countries improved, compared to 46 that deteriorated.

On average, violence accounts for 37% of GDP in the ten least peaceful countries, compared to only 3% for the ten most peaceful.

Looking at the economic impact of conflict, the research found that in 2016 it was $14.3 trillion or 12.6% of world GDP. While still staggeringly high at $1,953 for every person in the world, this represents a slight (3%) decrease from 2015 and the first reduction since 2011. On average, violence accounts for 37% of GDP in the ten least peaceful countries, compared to only 3% for the ten most peaceful. Syria remains the least peaceful country for the fifth year running, having fallen 64 places since the index began – the largest decline of the past decade.

The report also assesses recent political developments in Europe finding that the sharp increase in support for populist parties in the past decade closely corresponds with deteriorations in Positive Peace. While Europe’s overall score on Positive Peace improved very slightly from 2005 to 2015 by 0.3 per cent, its improvement is well behind the global average improvement of 1.6 per cent. Many of the core EU countries recorded substantial deteriorations, including Italy, France and Spain. Increased perceived levels of corruption within the political elite, rising inequality in wealth, deterioration in press freedoms and media concentration, along with diminishing Acceptance of the Rights of Others are linked to many of the issues populist parties have successfully capitalised on. This demonstrates how the negative trends in Positive Peace across Europe cannot be separated from the rise of populism across the continent.