MK Ayman Odeh, leader of the predominantly Arab Israeli Joint List party, reportedly tried to pay a hospital visit on Friday to Daoud Zubeidi, the brother of notorious terrorist Zakaria Zubeidi, who was critically injured during a clash with Israeli forces in the West Bank.

According to the Kan public broadcaster, Odeh arrived on Friday evening at the Haifa hospital where Daoud Zubeidi is receiving care. However, it was outside visiting hours and Odeh was denied entry by medical staff.

Odeh’s office told Kan they would not comment on the matter.

Odeh’s reported was visit was not the first time the lawmaker has gone to an Israeli hospital to visit a terror suspect.

Last year he went to Kaplan Medical Center in Rehovot to see Miqdad Qawasmeh, a Hamas terror group member being held without charge who has been on a hunger strike for nearly three months. Odeh was said to be visiting Qawasmeh to offer his support. While there, he physically clashed with MK Itamar Ben Gvir, a member of the hard-right Religious Zionism party. Qawasmeh later ended his hunger strike.

Daoud Zubeidi, 40, previously served time in Israeli prisons for terror convictions, as well as a recent period of administrative detention, a controversial legal procedure which allows Israeli authorities to hold prisoners without charges.

He was reportedly among 13 Palestinian gunmen injured Friday in fierce exchanges of fire with Israeli troops near and in the city of Jenin in the West Bank during an arrest operation carried out by police special forces and the Israeli military.

Israeli police commando Noam Raz, 47, was killed during the clashes.

Zubeidi was shot in the abdomen during the clashes — he was initially hospitalized in the West Bank, but was later transferred to the Rambam Medical Center in Haifa at the request of the director of the Jenin Hospital, Muhammad Abu Ghali, following a deterioration in his condition.

Zubeidi was taken by a Palestinian ambulance to the Jalama-Gilboa crossing, where he was transferred to an Israeli ambulance and taken to the Haifa hospital.

Israel has recently stepped up its operations in the West Bank and especially in the Jenin area, where several terrorists behind recent deadly attacks carried out in Israel were from.

Daoud’s brother, Zakaria Zubeidi, is a convicted terror leader who last year escaped from Gilboa Prison for a week before being recaptured.

Six prisoners — five of them members of the Palestinian Islamic Jihad, along with Fatah commander Zubeidi — escaped from the prison on September 6, making their way out through their cell’s drainage system and an empty space underneath the prison. 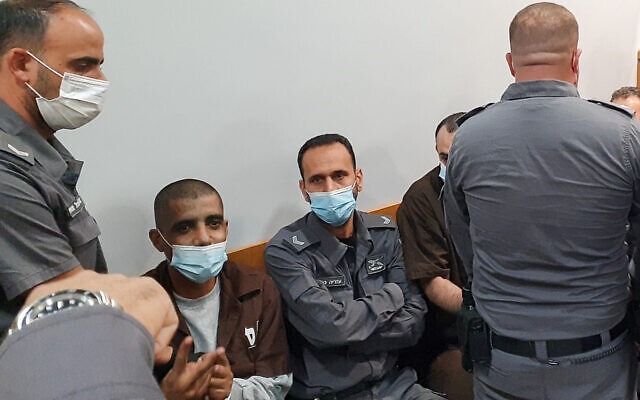 Zakaria Zubeidi arrives for a court hearing at the District Court in Nazareth, on October 24, 2021. (David Cohen/Flash90)

Four of the prisoners, including Zubeidi, were captured in northern Israel within the first week, but two others made their way to Jenin and hid out there until their arrest on September 19.

The alleged mastermind behind the jailbreak, Mahmoud al-Arida, told investigators that Zubeidi was added to the jailbreak plan at the very end, in hopes that his connections in the Palestinian Authority would help protect them. 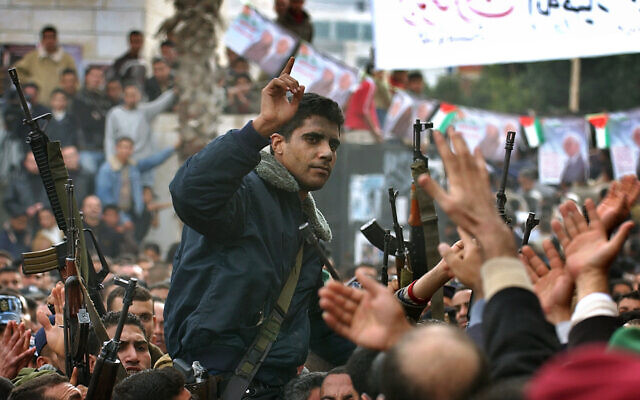 In this December 30, 2004 photo, Zakaria Zubeidi, a leader in Fatah’s Al-Aqsa Martyrs Brigade terror group in the West Bank, is carried by supporters during a presidential campaign rally in support of Mahmoud Abbas, in Jenin. Zubeidi, 46, who has been detained since 2019, is one of six Palestinian security prisoners who escaped early on September 6, 2021, from an Israeli high-security facility. (AP Photo/Nasser Nasser, File)

The notorious terrorist masterminded terror attacks during the Second Intifada as a member of the Al-Aqsa Martyrs Brigades and was granted amnesty in 2007.

In 2019 he was arrested again, and charged with taking part in two shooting attacks against Israeli buses in the West Bank, with additional allegations dating back to the early 2000s added to the charge sheet.

Zubeidi is currently imprisoned at Eshel Prison near Beersheba in southern Israel.